New WooWoo research reveals true state of UK women's self-esteem With Love Island body pressure, diet fads everywhere and the cost of living crisis, January 2023 is set to be the bluest Monday on record Psychologist Charlotte Armitage explains why January is the worst time to introduce big changes - especially for your mental healthis urging women to stop putting so much pressure on themselves, turn off negative influences and instead focus on prioritising themselves and what makes them happy to stave off the blues. 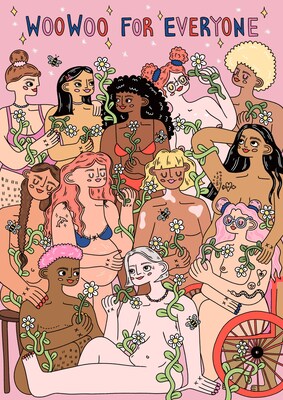 The recent study of over 1,500 women revealed almost a third (32 percent) of those surveyed were not confident about their body, with 1 in 10 saying they hated everything about it. The research also uncovered what parts of their bodies they disliked. The top three areas they revealed they hated the most were:

As a result, well over half of women are taking steps to watch what they eat, going on diets or exercising more. The causes behind the UK's lack of confidence were also revealed, with almost two-thirds (63%) blaming social media, news channels, and reality TV Shows.

When asked which affected them worst, Love Island, which starts on Blue Monday, was the clear winner. Over three-quarters (77%) said it put pressure on how they felt about their bodies, followed by The Kardashians (52%) and TOWIE (38%). Less than 1 in 10 (7%) were addressing their mental health to improve their confidence, in spite almost half (47%) admitting it's affecting it. Two out of five (40%) of those surveyed confessed it affects their social choices such as going out to a bar.

The study also looked into what makes women feel good. The research revealed this to be spending time with family (82%), going on holiday (79%) and watching a good movie (77%). In response to the findings, WooWoo is launching their Prioritise You Movement - a campaign which aims to encourage women to prioritise themselves first.  The brand has teamed up with TV psychologist Charlotte Armitage to discuss the best approach to setting new goals. Charlotte said:

"January is already filled with so many external pressures such as tax returns, rising cost of bills and food, not seeing as many family and friends, so setting new goals on top of this more often than not leads to failure. This compounds negative feelings and can lead to worsening self-esteem and mental health.

For some reason, we see January as the month for big change but setting new goals for yourself over the festive holidays and a period of out of the ordinary activity - i.e. you're on holiday from work, surrounded by friends and family, is not necessarily the time to be assessing how a new regime might fit into your life.

If you want to make real changes, it needs to be emotionally driven and you need to understand why. If you want to lose weight because you've put on a few pounds over Christmas, firstly give yourself a break.  This is totally normal at this time of year as we socialise, eat and drink more.  Perhaps consider buying a bigger pair of jeans until you've settled back into normal life for a few weeks.

Instead, look at implementing change from February, when you've settled back into the new year and the worst external pressures have passed. Make those changes realistic too, it's not all or nothing. If you want to run a half marathon, start with one mile in February, two miles in March, etc.

Setting yourself realistic, more achievable targets will mean you are more likely to succeed and the personal affirmation and confidence you'll gain from hitting your goal will motivate you further and if you need or are feeling low in your opinion of yourself, please seek help."

WooWoo has also partnered with Nina Sweeney – a body-positivity illustrator to create a limited-edition collection of merchandise. The artwork aims to celebrate all women and provide messages of encouragement and empowerment.

Lucy Anderson, WooWoo's founder added: "It's saddening to see so many women have such low self-esteem.  With current external pressures including the cost of living crisis already putting more pressure and stress on us, it's more important than ever to focus on our mental health. Forget finding the 'New You' this January and instead prioritise yourself and what makes you happy to set yourself up for a healthier, happier year."