Toyota Launches Stamping-Type Plating Machine that Significantly Reduces Environmental Impact and Transforms Plating Process. The technology is used in the plating process for forming copper, nickel, and other metal coatings on substrates in the process of manufacturing electronic parts. Toyota has also announced a collaboration with Mikado Technos Co., Ltd. and Kanematsu Corporation to manufacture and sell, and therefore expand the use of, new plating machines based on this new technology. The machines will be launched on July 1. 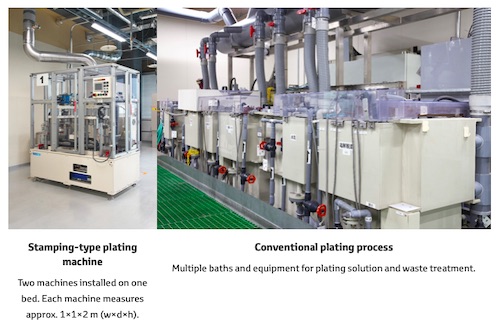 This new stamping-type plating machine eliminates the need of a dipping process where parts to be plated are completely immersed in multiple baths of plating solution, which is required in the most common plating process at present. As a result, waste solution can be dramatically reduced to about one-thirtieth and CO2 emissions to about one-third, which contributes to a significant reduction in environmental impact. The technology also reduces plating time and process footprint.

Toyota decided to launch the stamping-type plating machine, which is expected to deliver these outcomes, and expand use to many companies in a range of industries, not just to its business partners in the production of Toyota automobiles, to help reduce the impact on the environment and provide other benefits. Specifically, Toyota is providing its patents and expertise to vacuum press manufacturer Mikado Technos, which has incorporated its own technologies to develop and manufacture a stamping-type plating machine for sale through Kanematsu.

Over the next two to three years, Toyota hopes to sell the stamping-type plating machine for use by a number of companies as a test machine for verification and evaluation purposes. Then, from 2023 or 2024, with the aim of achieving widespread use, it will expand sales more broadly for use by general users as a full production machine.

Toyota announced the Plant Zero CO2 Emissions Challenge as part of the Toyota Environmental Challenge 2050, an initiative to contribute to the creation of a sustainable society, which is one of the SDGs(2). The Toyota Group will work together to fulfill this challenge, adopting stamped plating machines within the Group and steadily reducing the amount of CO2 it emits during its production processes.

The newly developed stamping-type plating machine has a head, with the upper part filled with solution, and a solid electrolyte membrane, through which metal ions pass, mounted to the tip of the head that is pressed against the area to be plated. This structure enables the solid electrolyte membrane, which is mounted to the tip of the head, to be pressed against only that part of the substrate that requires plating. When the electric current flows, a metal film (plating) is applied, like a stamp, only to the area in contact with the membrane.

In the conventional plating process, however, substrates are completely immersed in solutions of copper, nickel or other plating metal and the metal film (plating) is created when the electric current flows. Multiple large baths for dipping the complete substrates are required for this and substrate washing processes before and after plating. Large amounts of plating solution must also be used because the complete substrates have to be immersed in the baths, which means that large amounts of plating solution must also be discarded (wasted) after use. The entire plating process, including the equipment for removing toxic substances released into the air and for treating large amounts of waste solution, can be extensive.

(2) The International Goals to 2030, adopted by the United Nations General Assembly in September 2015. It is a comprehensive set of 17 goals (social issues) for achieving a sustainable society.

Toyota Motor Corporation (TMC) is the global mobility company that introduced the Prius hybrid-electric car in 1997 and the first mass-produced fuel cell sedan, Mirai, in 2014. Headquartered in Toyota City, Japan, Toyota has been making cars since 1937. Today, Toyota proudly employs 370,000 employees in communities around the world. Together, they build around 10 million vehicles per year in 29 countries, from mainstream cars and premium vehicles to mini-vehicles and commercial trucks, and sell them in more than 170 countries under the brands Toyota, Lexus, Daihatsu and Hino. For more information, please visit www.toyota-global.com.