MC and Kinki Sharyo Sign Contract with Egyptian Government for Rolling Stock Deliveries for Phase 1 of Cairo Metro Line 4. (Kinki Sharyo) are pleased to announce that we have signed a contract with National Authority for Tunnels (NAT) to deliver 184 cars of rolling stock for Phase 1 of Cairo Metro Line 4(New CP 412). The total amount under this contract, in which MC shall serve as the prime contractor, is approximately 40 billion yen. 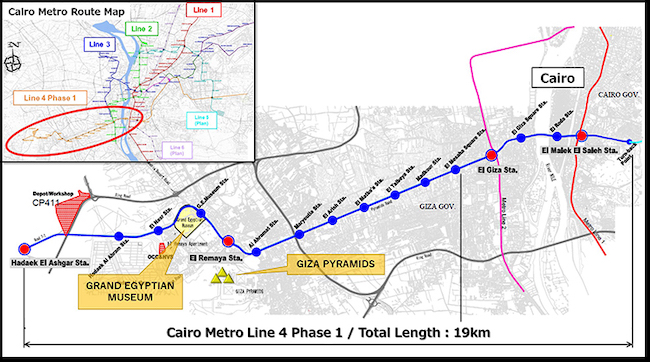 Under the terms of the contract, MC will oversee the project's schedule and day-to-day operations and Kinki Sharyo will supply the rolling stock.

Funded through ODA(1) loans from the Japan International Cooperation Agency (JICA), Phase 1 of Cairo Metro Line 4 project including New CP412 will be expected to take advantage of advanced railway technologies developed in Japan. In November 2020, MC signed a roughly 90-billion-yen contract with the Egyptian government to deliver the Railway Systems, Track and Depot Works Package (CP411) for Phase 1(2). Both contracts are yen-loan projects in Egypt under JICA's STEP(3) program. The rolling stock supplied by Kinki Sharyo will be manufactured mainly with Japanese components and delivered in stages, beginning in 2025 and concluding in 2028.

Phase 1 of Cairo Metro Line 4 will run from central Cairo to the Giza Pyramid Complex in Southwest Greater Cairo. Ongoing urbanization in the Egyptian capital has resulted in its rapid population and traffic growth, and the development of public transportation infrastructure has become a matter of urgency for city officials. Not only is Line 4 expected to help ease Greater Cairo's traffic congestion, but it also has tremendous potential as a tourist line connecting central Cairo to the pyramids and the Grand Egyptian Museum, which is currently under construction.

MC and Kinki Sharyo have been delivering rolling stock to Egypt for more than 50 years, and to date, we have supplied the country with roughly 1,600 railway cars.

Through sustained, proactive engagement in the country's railway projects, MC and Kinki Sharyo remain committed to helping to expand and upgrade the transport infrastructure and contribute to the economic growth and development in Egypt.