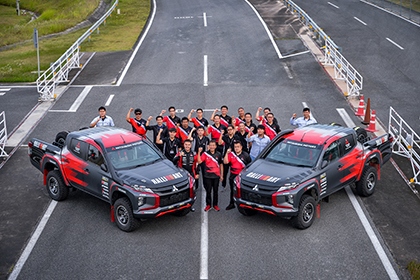 On the first day of the competition, the team will drive a special stage (SS) in Buriram, northeastern Thailand, followed by a ceremonial start, and then will enter a full-scale stage in Thailand from the 22nd, before reaching the goal in Siem Reap, northwestern Cambodia, on the 26th.

On November 9th, prior to the opening of the AXCR, Team Mitsubishi Ralliart carried out a shakedown of the Triton rally cars that will compete in the AXCR, on the proving ground of Mitsubishi Motors (Thailand) Co., Ltd. (MMTh) in Si Racha, Chonburi, Thailand. In previous years, the rally had been run in August during the rainy season, which created challenging routes of mud-clogged roads and river crossings, but this year, the COVID-19 pandemic pushed the rally start back to the drier month of November. As a result, in addition to the tough routes, the team is anticipating dry, off-road trails and new challenges including steep gradients.

To prepare for these challenges, Team Mitsubishi Ralliart subjected the Triton rally cars to a total of 1,900 kilometers of endurance testing. After checking the reliability and durability of the rally cars while making final engine and chassis adjustments to deliver both powerful performance and ease of handling, the team was able to confirm that the cars are ready for the rally.

In Leg 0, a total of 56 machines - 21 vehicles in the motorcycle category, 2 in the sidecar category, 32 in the car category, and 1 in the truck category - will run in an opening SS in the city and then participate in the ceremonial start to be held at the Chang Arena. The rally proper begins on the 22nd with Leg 1, and will be competed over courses in the area around Buriram, until Leg 3 on the 24th. Leg 4 on the 25th takes the rally close to the Thailand and Cambodian border before crossing into Cambodia for the final Leg 5 on the 26th, to the finish line near the World Heritage site of Angkor Wat.

"The accomplished engineers of our development team, who had supported the team in winning numerous victories in the World Rally Championship and Dakar Rally, passed down the technology to our mid-career and younger generations and prepared the rally cars for the grueling AXCR. Under the leadership of team director Hiroshi Masuoka, who has won the Dakar Rally two times in a row, I am confident that the team will come together to deliver a strong performance with Mitsubishi Motors-ness. Please look forward to a great showing from Team Mitsubishi Ralliart."

"To lead the team to victory as team director, I have drawn on my rallying know-how and experience, built the team organization, and worked to hone our cars. The Triton rally cars have improved with every running, and they are now faster, stronger, and tougher. We have a great service organization in place to support the team, allowing the drivers to apply 100 percent of their own potential. The whole team is ready for this tough challenge."

Starting on November 21st, the first day of the rally, and continuing to the last leg on November 26th, Mitsubishi Motors will post daily reports on the company's AXCR special website.

At the JAF Motorsport Japan 2022 to be held on November 19th and 20th in Odaiba, Tokyo, a Triton rally car AXCR 2022 replica will be on display for the first time in Japan.

Mitsubishi Motors will also display the same car at the company's headquarter showroom in Tamachi, Tokyo, from November 21st, the first day of the AXCR 2022.

Mitsubishi Motors Corporation (TSE:7211) --a member of the Alliance with Renault and Nissan--, is a global automobile company based in Tokyo, Japan, which has about 30,000 employees and a global footprint with production facilities in Japan, Thailand, Indonesia, mainland China, the Philippines, Viet Nam and Russia. Mitsubishi Motors has a competitive edge in SUVs, pickup trucks and plug-in hybrid electric vehicles, and appeals to ambitious drivers willing to challenge convention and embrace innovation. Since the production of our first vehicle more than a century ago, Mitsubishi Motors has been a leader in electrification--launched the i-MiEV --the world's first mass-produced electric vehicle in 2009, followed by the Outlander PHEV --the world's first plug-in hybrid electric SUV in 2013. The company announced a three-year business plan in July 2020 to introduce more competitive and cutting-edge models, including the Eclipse Cross (PHEV model), the all-new Outlander and the all-new Triton/L200.

For more information on Mitsubishi Motors, please visit the company's website at