Russia is considered a highly trusted vaccine manufacturer and almost half of respondents in 11 countries are aware of Sputnik V, a YouGov poll shows 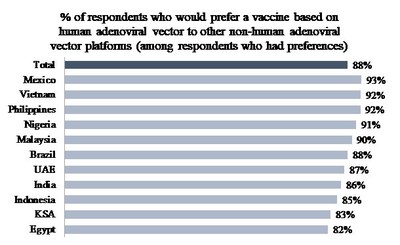 Russia as a vaccine manufacturer is the most highly trusted, with 21% of the votes, surpassing the USA at 15% and China at 13% among the first-choice countries named by respondents. In terms of the total number of mentions among the most trustworthy countries (each respondent named three countries), the leaders were the United States, Russia and China with 45%, 40% and 32% of the total votes, respectively. The strongest indicator of trust in Russia's vaccine was recorded in Mexico, Vietnam, the Philippines, Brazil, the Kingdom of Saudi Arabia and the United Arab Emirates.

"Russia's scientific expertise in microbiology, immunology and vaccine and drug development is highly reputable worldwide, which is confirmed by this survey. Russia, as a vaccine manufacturer, was mentioned more often than other countries as the most highly trusted. The survey covered 11 countries located in various world regions, meaning the survey had a good representation of different nationalities and cultures. A crucially important finding from the survey was the fact that the majority of respondents are ready to be vaccinated against coronavirus.

The results of the survey emphasize that residents of many large countries have a positive attitude towards the Russian vaccine and are aware of its technological platform and advantages. The survey participants who had heard about the Sputnik V vaccine expressed a greater readiness to vaccination due to their understanding of the reliability, safety and efficacy of the Russian vaccine. The platform at the core of the Sputnik V vaccine has been proven to be safe and effective over decades of scientific research and clinical trials. RDIF, together with the Gamaleya National Center will continue to work actively to make the Sputnik V vaccine available globally as soon as our country's vaccination needs are met".

Russian Direct Investment Fund (RDIF) is Russia's sovereign wealth fund established in 2011 to make equity co-investments, primarily in Russia, alongside reputable international financial and strategic investors. RDIF acts as a catalyst for direct investment in the Russian economy. RDIF's management company is based in Moscow. Currently, RDIF has experience of the successful joint implementation of more than 80 projects with foreign partners totaling more than RUB1.9 tn and covering 95% of the regions of the Russian Federation. RDIF portfolio companies employ more than 800,000 people and generate revenues which equate to more than 6% of Russia's GDP. RDIF has established joint strategic partnerships with leading international co-investors from more than 18 countries that total more than $40 bn. Further information can be found at rdif.ru

All figures, unless otherwise stated, are from YouGov Plc.  Total sample size was 12,323 adults in Brazil, Egypt, India, Indonesia, Malaysia, Mexico, Nigeria, Philippines, Saudi Arabia, UAE and Vietnam. Fieldwork was undertaken between 9th - 19th October 2020.  The survey was carried out online. The figures have been given an even weighting for each country to produce an 'average' value.